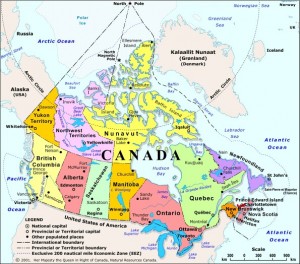 The cities of Canada and the United States are often compared to one another on many levels. From an outside perspective, Vancouver may seem to be identical to Seattle, and Toronto may seem to have a lot in common with Chicago. Montreal is sometimes compared to New York City and oil boomtowns in North Dakota are likened to Fort McMurray today. However,  Canadian cities actually have a number of differences that make them unique to North America.

The most obvious difference is the population of Canadian cities verses U.S. cities. Canada on the whole has 35-million residents while the U.S. has 318-million, making the cities of Canada considerably less crowded. As a result, the infrastructure of Canadian cities is also smaller, with less extensive sprawl than the major cities of the U.S.

The healthiness of the citizens of Canadian cities can be seen at a glance. The socialized medicine of Canada creates an atmosphere of security within the population. Those with medical conditions know they will be treated. Even those who have mental disorders or struggle with addiction in Canada live in the assurance that they will not be denied treatment for any reason. This knowledge is unifying and comforting, and can be felt within the cities of Canada.

The way that people behave in Canadian cities is also noticeably different from that of the United States. Canadians living in close proximity to one another have a stronger social consciousness than Americans do. For example, Canadians are more likely to fall into unison while driving and keep with a group speed rather than weave  through traffic or set their own speed. Capitalism is not as present in Canada as it is in the U.S., so Canadian goods and services are not as saturated with choices. The more socialistic government in Canada tends to make the populations of its cities more collectively cooperative.