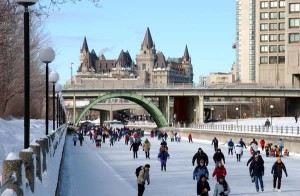 The cities of Canada are unlike cities anywhere else in the world. Directly above the United States, Canada’s close relationship with its neighbor to the south makes Canada a seat of the Western world, while still having clear ties to its European ancestry. The cities of Canada are like the cities of the U.S. in many ways, but have an identity of their own on many levels. The cold of Canada influences the culture of its cities, as do their proximity to one another and the rugged sturdiness of northern living.

The cold may seem like a geographical factor, but as we know from human history, geographical factors strongly effect the way people live and interact. The cold of Canada is seen in the culture and the representations of every Canadian city. It effects every Canadian’s outlook on life and it is part of Canada’s national identity. Most of what Canada is known for is related to its cold climate. The hockey playing, lumberjacking, flannel wearing, starch eating Canadian stereotype originated from the cold of Canada, and though there is obviously much more to Canada’s culture than these things, they represent a culture that emerged from cold northern living. This can be seen through the cities of Canada.

Secondly, because of the cold conditions and the thick forests of Canada, its population is much smaller than more south lying countries which means its cities are more spread out than they are in the United States. This gives them a unique identity as well. Canadians are thought of as more rugged and durable than many of the people who come from cities in the United States. This comes from a Canadian history of independence and ruggedness. The people of Canada have always had harsher conditions to deal with and it has made them hearty people. The space between their cities is a testament to how self sufficient one needs to be in Canada, even a modernized Canada with all the conveniences of the United States.